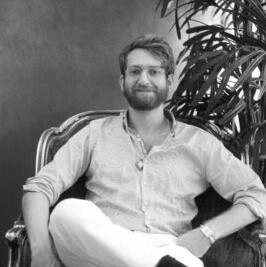 Robin Arnott is the founder and Lead Link of Entheo Digital, a digital therapeutics company developing and distributing experiences to support psychedelic therapists at all stages of journey work.

Before founding Entheo Digital, Robin was the CEO of Andromeda Entertainment, where he oversaw the distribution of VR experiences that provide psycho-spiritual fulfillment through embodiment and meditation.

As an experimental game designer, Robin has been recognized as an early maverick of Virtual Reality since the re-emergence of the field in the early 2010s. His VR experience “SoundSelf: A Technodelic” has been measured to produce states of consciousness comparable to psilocybin, and is currently being ported to mobile VR solutions.

A longstanding public speaker, Robin teaches and advocates for game design principles that evoke spiritual and transformative experiences by engaging the body. His work and ideas are featured in Netflix’s Screenland docu-series, and the documentary Game Loading: Rise of the Indies. He has spoken about technology as an awakening agent at the Game Developers’ Conference, Wisdom 2.0, Transformative Technology Conference, The Science of Consciousness, and TEDx Linz.

Flow States: The Creative Journey and Psychedelics
The workshop will begin with Prof. Dr. Dimitri van der Linden, who will be giving us an i…
View Event